A farmer from Cradock has beaten all the maize farmers in South Africa with his yield of just less than 24 tons per hectare!

In what may be the highest maize yield ever in South Africa. Erich Cloete of the farm Sanctuary in the Cradock district this year harvested an astonishing 23,92t / ha. He followed the normal program as advised by Cradock Seed Distributors and also used Crofft, a Fulvic acid and micro-nutrient fertiliser applied by boom spray at the 5th and 9th true leaf stage at just 260mls per application. Crofft promotes both root development and yield increases.

Erich said that it was evident that the maize cobs where Crofft was applied were bigger and heavier.

Erich is already a member of the 20 Tonne Maize Club competition sponsored by Cradock Seed Distributors, but the yields he achieved this season were still a big surprise! 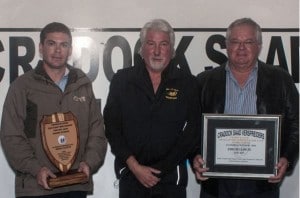 Mr. Dirk Visser (middle) Managing Director of Cradock Seed Distributors together with the winner of this years competition. On the left is Wessel Cloete Sales and Marketing Manager of Goldsuite, on the right is Erich Cloete who harvested 23,92 t/ha. As far as is known, this is the highest yield ever in South Africa for maize.